Considered a pillar of Chinese contemporary art, Wang Yan Cheng was born in the Guangdong province in 1960. For years, he helped his parents work in coal mines. Upon age 18, he enrolled at the School of Fine Arts, and later, when his family moved, at the Fine Arts Academy of Shandong. There he received an academic education and was also introduced to western art. Most of his professors had travelled to Europe, which bore on their artistic practices. In 1989, Yan Cheng participated in the first Chinese contemporary art fair held in Beijing. That was also the year in which he took his first trip to France, where he was to spend several months in Saint-Etienne following a plastic arts curriculum, before moving to Paris. Surviving off of portrait sales, the painter also derived nourishment from French and broader western art culture, studying master painters such as Picasso or Rothko. Having gained notice, Yan Chen was invited in 1996 to exhibit at the Prince Albert Foundation in Monaco and was awarded the Prince Albert Prize, which drew attention from art critics and the art market alike. The year 1996 brought a real turning point: Yan Cheng abandoned figurative painting, which he had until then favored, to follow his countrymen Zao Wou-Ki and Chu Teh-Chun into lyrical abstraction.

Wang Yan Cheng developed his own personal style, one hailing from various disciples of modern abstraction. If the influence of Zao Wou-Ki and Chu Teh-Chun, whom Yan Cheng met during this period, is above all manifest in the freedom he took from the constraints of figuration and stricter gestures, the artistic expression he developed was different from that of his two predecessors: he sought to divest himself of the real world. His painting is, in effect, eminently physical and visual; the artist incessantly seeks to transcribe upon the canvas the dialogue between man, the universe, and nature, deeply suffused with millennial art and Chinese philosophy. The titles of his works, as opposed to those of Zao Wou-ki’s later period which bear dates, demonstrate the intrinsic link that Wang Yan Cheng maintains with the real world, through titles such as Vase Composition or Night Falls on the Water. The mass of colors on canvas, their contrasts and harmony, the work in relief and planar areas, the fantastical conglomerates created by the painter, often drove critics to speak of his painting using cosmic terms, which then situated his works as depictions of “primordial chaos” or dizzying “black holes.” Wang Yan Cheng’s painting aims to portray the essence of things, interiority hidden behind appearances. To access this realm, the viewer has to enter his pictorial dimension to uncode the creator’s process by following the paths of thought and contemplation.

Having created a piece for Beijing’s Opera in 2007, Wang Yan Cheng was named Officer of the French Order of Arts and Letters. He shares his time between France and China. Ultimately, his life very much reflects his art, which emerges from skilled, thoughtful growth as well as from exchanges between two sets of culture from which he can draw inspiration to develop eloquent, singular, original art.

A brilliant creator of emotive and sensorial art with material contrasts and plentiful colors, Wang Yan Cheng won a place within the leading figures of contemporary lyrical abstraction. 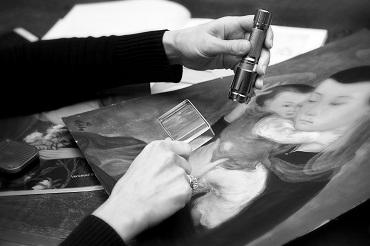