Zhu Yuanzhi, is an avant-garde Sino-American painter born in China in 1906. He joined his father in 1921 in the United States. He studied at the California School of Fine Arts and learned painting and drawing from Otis Oldfield. In 1926, he befriends a dozen other avant-garde artists such as Kenneth Rexroth, Jehanne Bietry-Salinger or John Ferren and together they found the Modern Gallery in San Francisco where he presents his first exhibition.

At the same time, Zhu Yuanzhi created a revolutionary school on Chinese art for his compatriots where he taught avant-garde techniques in terms of painting and artistic theories. Yun Gee’s life took a new turn when he met Princess Murat in San Francisco. It was an intellectual and artistic love at first sight, and she wrote, “On the shores of the Pacific, in San Francisco, where East and West meet, I met Yun. The subtle painting of this young Chinese boy was revealed between a pagoda and a skyscraper”. It was under his impulse that Yun Gee decided to move to Paris in 1927. The princess became a patron of the arts and integrated the Chinese artist into her circle of intellectuals, painters and poets. She wrote in this regard “Paris will appreciate his imagination, his sensitivity as a poet, his deep psychology
and the moving sincerity of his work”. She is not mistaken. Indeed, he paints a magnificent portrait of Ambroise Vollard, who was the dealer of notorious artists such as Picasso or Matisse. This suggests that Yun Gee was in contact with these artists during his stay in Paris and that he had been spotted by the biggest players in the modern art market. He even exhibited at the Salon des Indépendants, a true consecration, in 1929, 1930, and 1939.
Princess Murat is not the only one to sing the praises of the artist, respect and admiration are mutual. The artist’s works are very popular and sought after at auctions, and fetch beautiful prices. 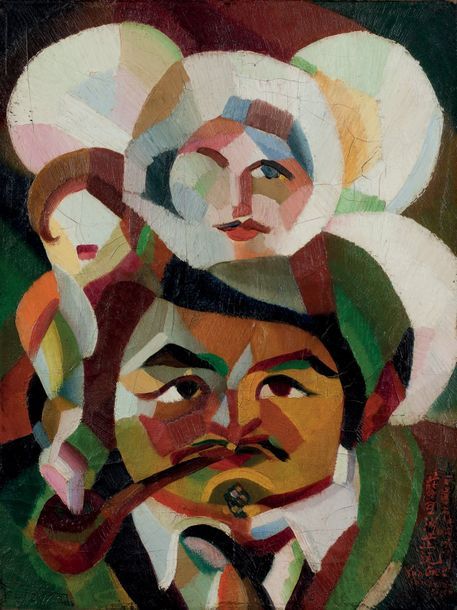