Born in Paris into a well-to-do family, Paul Sérusier is a famous modern painter and one of the founders of the Nabis group. He is also known as a great symbolist painter. From 1875, he attended the Lycée Condorcet from which he graduated in mathematics and philosophy. Ten years later, he decided to follow an artistic training. It was at the Académie Julian, which other artists attended such as Maurice Denis, Louis Valtat, Edouard Vuillard or André Derain, that he took classes. He became friends with Maurice Denis. In 1888, he spent the summer in Pont-Aven in Brittany, a popular place with French and also American painters. It is there that he met Paul Gauguin, a man who was crucial to the formation of his artistic style and philosophy. The latter strongly influenced him and encouraged him to use pure and vivid colours and above all to move away from realism and its constraints. Following this, Sérusier produced his famous painting Talisman (1888), which he showed to his artist friends while telling them about the lessons he had received from Gauguin. Artists gathered around Sérusier and his new principles, and henceforth formed the Nabis group. It is made up of Maurice Denis, Paul-Elie Ranson, Pierre Bonnard and Henri-Gabriel Ibels, later joined by Edouard Vuillard and Ker-Xavier Roussel. This group is also particularly oriented towards spirituality. Every summer, Sérusier returns to Brittany and spends his winters in Paris where he exhibits at the Impressionist and Symbolist exhibitions. From the beginning of the 1890s, his palette evolves and he no longer uses only so-called “pure” colours. He settles in Châteauneuf-du-Faou with his wife, where he will stay until the end of his life. At this time, Sérusier produced paintings, but also costumes and sets for the theatre.

In 1898, he undertook a journey that would be a new turning point in the evolution of his style and artistic philosophy. Invited by his symbolist painter friend Jan Verkade, he went to Beuron in Germany where he discovered the artistic doctrine of the monks, which was transmitted to him by Father Desiderius Lenz. According to this doctrine, there are “holy measures”, geometrical proportions and harmonies of form, which allow the artist to reveal the divine beauty of nature in his art. Seduced and convinced, he returns to Paris and tries to transmit this new principle to his Nabis colleagues. They did not show the same enthusiasm as Sérusier. The group gradually disbanded and split up for good in the 1900s. From 1908 onwards, Sérusier often taught at the Académie Ranson. He still exhibits regularly. The artist published an ABC of painting in 1921 in which he relates his theories on art. He died in 1927. His ideas and his work will have forever marked the history of art, giving him a great international reputation. His works are therefore particularly sought after by collectors, and are in great demand in auction rooms all over the world. 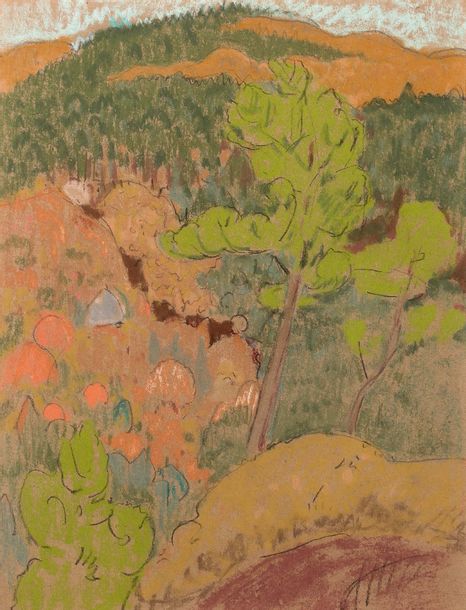